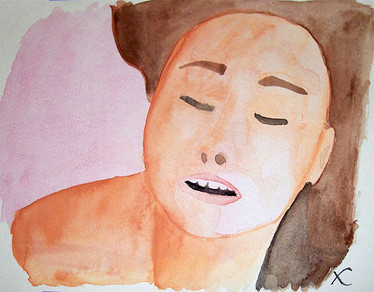 Horoscope of the day…

As Mars has just entered Neptune’s home sign of Pisces, and as its immediately applying to conjoin Neptune, it’s a good time to look at the Mars/Neptune relationship to sexuality. Since Mars rules desire and Neptune rules the reaching or yearning for the ineffable, there is a very clear relationship between these two planets in aspect to each other and the worlds of sexuality, especially the complexities of the orgasm.

The word “orgasm,” means something like “to swell” or “to ripen,” and there is even an etymological link with the words “anger” and “heat.” Another phrase used by the french to describe an orgasm is “la petite mort,” which means “the little death,” though the french saying is thought to refer more toward the post-orgasmic state than the orgasm itself. Either way, the planetary forces of Mars and Neptune are intimately related to both the sexual drive, the excitement, the swelling, the releasing or dissolving, and even the death that follows an orgasm or sexual climax.

As the rulers of the first and last signs of the zodiac, Mars and Neptune are like metaphors for a greater cycle, whose symbolism is intimately presented by the orgasm. Life begins with an explosion, a swelling, a frustration…whether we’re looking at the big bang or labor pains (women even orgasm during labor sometimes), the emergence of something new has a Mars like quality. And yet, Mars also implies desire, an end toward which something is propelled…a guiding fantasy or image or archetype calling us. The guiding fantasy, the image, is Neptune. The dream, the mythological story, the yearning for finality or return, for redemption or dissolution, this is Neptune’s call to Mars. And yet Neptune is also death. An illusion of redemption that quickly becomes the blank eyes of a decomposing body…ashes to ashes…blown on the wind across the sea.

Orgasms hold the same pattern and also present similar complications to our relationship fantasies. We meet someone, we share a connection, heat and excitement and frustrations are built, a swelling is created. We see in that person an image of redemption, of finality, of everything we’ve ever wanted. We dance the elaborate dance of mating and courtship (Mars among other things to the Greeks was a god of dance), and then we explode into the mess of love, and through our climaxes we fall away from each other and die.

We fall away from each other because the guiding fantasy is exhausted, and we become bored with each other. The gleam wears off. The fantasy is too familiar, and we start to long for something new. Maybe we find something new, and new heat is built…but over time the same exhaustion is likely to repeat itself. Why does this happen?

All discussions and debates about monogamy aside, it happens because it’s an archetypal experience. And with knowledge of the experience it’s possible to shift our relationship with the pattern.

For example, in the Taoist tradition there are specific suggestions for how often to release during intercourse so that the vital essence (lets call it the ability of our guiding fantasies to stay alluring and powerful) remains in tact. In many other traditions, periods of celibacy are recommended for the sake of longevity, health, and intimacy alike. With the planets Mars and Neptune its always possible for our physical strength, stamina, and vitality to get easily depleted or overwhelmed by our desires for ecstasy or release.

Most people inherently know all of this but nonetheless struggle with it in their relationships. Even if it just means that the guiding fantasies of our sexual lives need variety, need times to rest and be intimate in different ways so to build back the “charge” between us…we need to learn how to be wiser about this pattern. Neptune’s effect on our desire nature is often to completely exhaust and extinguish our sexual potency as well as our richest fantasies, like salmon who quickly die after reaching their spawning ground upstream.

At the same time, the entire Mars/Neptune pattern can work in reverse, which creates a different problem. The desire for that which is “beyond this world,” can also look down its nose at Mars’ heat and swelling. Neptune/Mars can thus become the martial restraint of our fantasies because we are concerned only with “higher and holier” things. This pattern has obviously created an entire history of sexual repression that is just as disturbing if not more disturbing than our inability to keep our sexual charges alive with each other over time.

Another pattern with Mars/Neptune is the inability to hold our orgasms. Nocturnal emissions or wet dreams, as well as premature ejaculations are all instances of the Mars/Neptune phenomenon. And here again we have a range of complex issues at play. On the one hand, for thousands of years orgasms have been looked down upon by religions around the world as unclean, and yet most religions have a kind of special exception for nocturnal emissions. Wet dreams were considered the product of an evil succubus preying upon men in their sleep during the medieval times, whereas St. Augustine viewed them neutrally (they weren’t sins) because they were involuntary, whereas various Jewish texts imply that they are the result of impure “daytime” thoughts (we might recognize the foreshadowing of Freud in this idea). But on the other hand, the famous sex researcher Alfred Kinsey suggested that they were more likely among men who didn’t masturbate (perhaps an indication of sexual repression).

We can’t help but living with a swelling and erotic, even angry and frustrating desire nature. Mars is part of who we are. But within that nature there is also the implication of our mortality. Our limitations. We can’t have desires for something “more” without the feeling of being limited by or frustrated by what “is.” Neptune on the other hand is the guiding fantasy, illusion, or hope for a final salvation from these limitations. When combined with Mars we will go to great lengths to achieve this final salvation. We’ll go to great lengths to absolve our cravings. The question becomes, “Do my heavenly desires weaken and exhaust my life force, or do they maintain it?” And the answer is generally found in our ability to understand the dynamics between Mars and Neptune and continue working them creatively in our lives and relationships.

Some ideas to consider:

* Not all orgasms are good
* Not all spiritual restraint from sexual release is healthy
* Not all heavenly desires are strengthening us
* Not all earthly angers and frustrations are “lower” or “less than”
* Not all swelling needs to be controlled
* Not all releasing needs to be allowed
* Just because we love each other doesn’t mean we don’t need breaks from sex, doesn’t mean we don’t need time to build the charge back up
* Sometimes sex without orgasm is better, it keeps the guiding fantasy of the connection alive
* Sometimes sex WITH orgasm is better, it allows for the guiding fantasy of the connection to die and change
* Sometimes you really do need a cleanup shower after sex
* Sometimes the guilt of sex is good for you
* Sometimes its not
* Sometimes you can’t hold it, so don’t try
* Sometimes you can so you should work on it

Prayer: I can’t hold it much longer, it’s getting stronger…Baby, I got sick this morning, A sea was stormin inside of me, Baby I think I’m capsizing, the waves are risin and risin. And when I get that feeling, I want sexual healing…(Marvin Gaye)


Image by courtesy of Xandercook, at creative commons image licensing