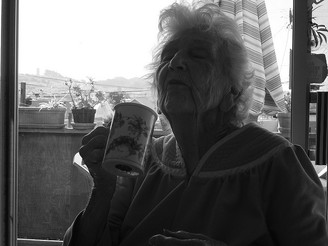 The Moon is in Gemini today, aspecting Uranus, Chiron, and the nodal axis this afternoon. Meanwhile the Sun is almost conjoined with Pluto in Capricorn just as its entered the second, Venus ruled decanate of Capricorn.

Success, hard work, determination, public reputation…but not without style, class, pleasure, and beauty. This is the second decanate of Capricorn…where the influence of Venus is working its way into the Capricorn season. Meanwhile Mercury is about to conjoin with Venus (both also in Capricorn right now), emphasizing the phrase “beautiful communication.”

* A man looks in the mirror, likes the way he looks, says so

* A woman driving in her car, lets someone in her lane, feels good about herself

* After success, a second glass

* Someone in the street is lifting a heavy box; they look good doing it

* A man with a pipe in his study, surrounded by decades of books and totems, puts his feet up

* A slowly written thank you letter

As the Sun conjoins Pluto in the next few days we will walk through a very powerful time of transformation or transition. The transition may not be felt ultra consciously since it is still very early in the solar year, but the events of the next week, through the Full Moon, will indeed be tone setting for the year ahead. Right now many people are getting new ideas, new actions, and new visions that will need acting upon swiftly in order to “catch the wave” of the planetary forces. So whatever you do, don’t dally if you know it’s the right time for something new. Don’t be lazy. don’t wait for later. Don’t go to your usual list of excuses. Now is truly the time. The Pluto/Sun conjunction allows for us to see our nonsense very clearly and to actually do something about it. The hero (Sun) sees the darkness (Pluto) and grows stronger/wiser and more focused as a result. The ego is capable of maturing a great deal in the next week, but it all depends on taking the actions that we know we need to take and not avoiding them out of fear or complacency.

This challenge is full on right now given the simultaneous “Venus” vibe that’s hanging around in the air. It could be very easy to slide into a kind of wishy-washy “half assed” zone. Right now, if we do the work we know we have to do, and we make sure to take our time and enjoy ourselves while we’re doing it, the results will be a much easier/smoother journey toward the Spring Equinox (when many of these works will turn a major corner and we will find even more support for the work we’re now starting).

Prayer: My yoke is easy and my burden is light. –jesus


Image by courtesy of Reed, at creative commons image licensing.