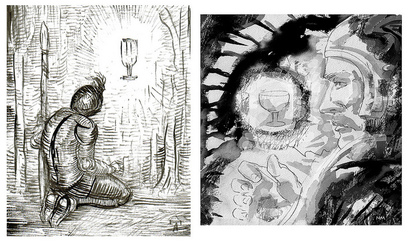 The Moon is in Libra today, moving into its last quarter phase over the next 24 hours. Meanwhile the Sun has entered the final, Mercury ruled decanate of Capricorn, and Mercury and Venus are entering the second, Mercury ruled decanate of Aquarius. Last but not least, tomorrow morning Mars leaves Aquarius and enters Pisces to stay for over a month.

The last quarter Moon asks us to look at what’s left and to make wise choices with what’s remaining. It’s an evaluation moment. Some things will stay and others will go. It’s a finally coming home kind of moment. A finalizing or wrapping up of the holiday spirit that began and passed over and through our year’s first moon cycle. There is a bittersweet sense of an ending in the making. As this ending reflects the signs of Libra and Capricorn we will likely be evaluating how our relationships are helping or hindering our personal ambitions, reputation, and sense of destiny. We’ll be asking ourselves, “Are things equal? Do they need to be equal? How can the burden of responsibilities be shared differently so to create the ideal situation for everyone and for the future?”

With so much Mercury emphasis in the air, and with Mercury preparing to enter its retrograde cycle later this month, there is also a sense of urgency right now to get our ducks in a row. To get organized, to sort through the setup, or to structure our lives according to our most important thoughts and ideas. What we think and meditate upon, the images and ideas, are constantly shaping our reality. It might be a time where we have to look at our surroundings and update the external environment so that our newest ideas are reflecting back to us the new future toward which we’re heading. For example…sometimes it’s good practice to reorganize our altars or even the images streaming on our desktop computers. The careful placement of our ideas around us in the physical world is like a form of Magic…one that Mercury especially seems to appreciate.

Finally, with Mars about to enter Pisces it’s like a new season of weather is moving through Mars’ archetypal landscape. While Mars is always about passion, drive, desire, aggression, confrontation, muscle, strength, courage, and adrenaline, the sign Mars is traveling through modifies or colors the Mars energy in particular ways. As Mars has been culminating in Aquarius, the drive has been toward the confrontational nature of progressive ideas. The courage that it takes to stand up to authorities or traditions that are in some ways outworn or outdated. The courage to do something new. The desire to ennoble and elevate society or culture. The martial qualities of various groups or group/cultural ideologies, etc. With Mars entering Pisces, the expression of Mars will start to reach beyond even these worldly concerns and into the ineffable. Mars in Pisces is like the composer possessed by a fugue state of creativity, caught in a maddening frenzy of angelic yearning. He will starve himself and die so that the song he hears comes through for the world. There is a martyr’s quality to this mars..the bombs strapped to the chest, and the terrorizing alleluia of a Joan of Arc kamikaze. Glistening armor or the poetry of the troubadours. The rush into an ennobling defeat. This is also a Mars who struggles with impotency..the feeling of an overwhelming fatigue, a single rower set against the ocean. The underdog victory or collapse…the saint and the crucifixion, the memorial for the poor and the holy words echoing off the walls of some old stone temple. The gaze into the first sun’s rays…the angels and the knights of vain glory. A monty python’s grail.

Prayer: Help our ideas find their way into our lives and outside of the private places where we hold them captive. So that they might begin to have a life of their own, and so that they are less likely to kick the doors down and dive bomb others when they finally escape.


Image by courtesy of diversityaffluence, at creative commons image licensing