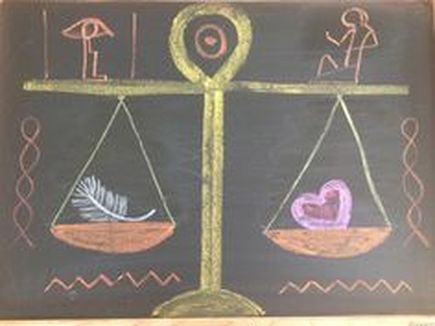 * Right before, during, and just after planets perfect their aspects, it is common to see events in our personal lives or in the collective that mirror the combinations of planetary archetypes.

* Uranus in the sign of the Ram reflects the process of militant rebelliousness, of defiant disruptions, of shocking and rule-breaking aggression or hostility, of warrior-like disregard, of eccentric competitiveness, of shocking and agitating or unpredictable forms of revolution.

* Watch the news today, and also over the course of the rest of this week, as Jupiter separates from its opposition to Uranus we are also likely to see important events constellating all of the themes above.

* In our personal lives, we should also maintain an awareness of the need for revolution and invention while also paying attention to the process of karmic justice. It takes courage to recognize when and where to defy, to rebel, to invent, or to resist, but it also takes courage to recognize where the process of justice, of our own karma, is challenging us to reform our lives or to accept a subtle form of due process. Sometimes the real revolution isn’t as much about charging ahead as it is about reform, about pulling back, examining, and reconsidering our actions or general life direction.
​
Prayer: Thank you for this season of change. Give us eyes to see our hearts being weighed on the scales of justice. Show us fairness and beauty in equal measure, so that we might grow in loving intelligence.