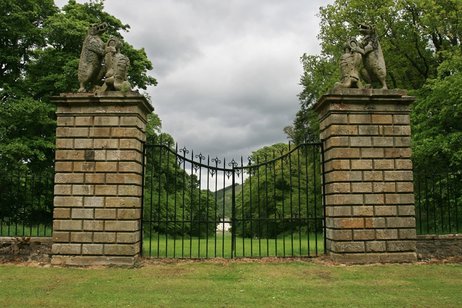 Let’s call on the I Ching to reflect on the applying Mars/Saturn dynamic.

* The 2nd hexagram of the I Ching is the archetype most deeply related to non-action, contemplation, reflection, receptivity, surrender, and acceptance.

* When Mars, a fiery hot planet of desire, action, and impulse, meets up with Saturn, the planet of restriction, prohibition, denial, and negation, it’s as though what we want and what we desire aren’t happening, or they aren’t happening quickly, or we are being directly thwarted or frustrated. At the same time, read enough astrology and you’ll see that astrologers also frequently spend time talking about Mars/Saturn in relationship to austerity, discipline, focused restraint, productive limitations, and so forth. How do we get such variety?

* The answer has to do with the consciousness that we bring to the opposition, as well as the “karma,” for lack of a better word. We are each conditioned by a variety of forces in life, much of which mask themselves as personal choices and “free-will.” Mars and Saturn oppositions often provide us with opportunities to get in touch with just how conditioned and restrained by these patterns we are. Mars/Saturn oppositions bring us up against the limits of our power, or the limits of our ability to do or act or think against our own habitual nature, and when we meet these limitations we are either naturally led into a reflective posture, or we fight against the limitations and often the fruitlessness of the fight leads us into a kind of frustrated submission later on.

* Hexagram 2 is a way of saying, “When you see this transit coming, start to enter this position of receptivity naturally, rather than being forced into it later when it’s more painful.”

* Hexagram 2 is the admonition to try on for size the idea that you are not in control and that your free-will isn’t going to save the day in every situation.

* Hexagram 2 also suggests that we try on for size the idea that deliberate self-restraint, along with the intentional act of being reflective and receptive, will bring liberation more quickly than any great heroic efforts.

* For example, let’s say that your house is in a total mess, money is tight, and you are under the pressure of deadlines at work. Mars/Saturn is like that voice that says, “WILL it all to be done, right NOW!” And so you try to hero through all of it but in the process of all of this work, while cleaning your house you pull a muscle and curse out your spouse, you half-ass your work assignment, disappoint your boss, and end up doing a little retail therapy that puts you farther into debt.

* If you followed hexagram 2’s advice you might have sat down in the midst of the mess, found one room in your house, and worked on a detailed cleaning of that room, and those shelves, each day in whatever spare time you had. You wouldn’t have gone nuts doing it, but rather focused on the small things and done the work with devotion, being content to sit in the mess and let it resolve itself slowly. At work you would have followed the same approach, each day focusing and doing whatever you could to meet your deadline while doing quality work, without rushing, without slamming energy drinks, and with your budget you would have made a daily plan and focused on frugality each day and not let yourself impulse shop to deal with the stress from the earlier energy drink. Suddenly, before you know it, while staying small, learning to be content within the constraints of the times, your boss praises your work and assigns you a small team of helpers, your tax refund check comes in the mail unexpectedly, and little by little your house is clean.

* The first line of the 2nd hexagram reads, “Treading on hoarfrost, surely turns to ice.”

* This line suggests two different patterns that may take root in the midst of this Mars/Saturn dynamic. On the one hand, the constraints we face during the Mars/Saturn dynamic may mark the beginning of the end of something. When we encounter a roadblock, often the roadblock is simply the first “no” we receive that really indicates a much larger “no” to come, just as the first sign of frost indicates that the deep/hard ice of Winter (which is the ending/death time of year) isn’t far off. On the other hand, the formation of hard-ice at the foundation of something is also an image of clarification and crystalization. Understanding our limits, our ignorance, and our shortcomings, we have nowhere to go but deeper into the path of wisdom. Although the path of wisdom often requires a “hard/cold” encounter with the unconscious, or our ignorance, this encounter will provide a solid foundation and a kind of crystal clear and icy cold detachment from the fires of our passions, especially those that keep us ensnared in patterns of resistance and reaction.

* When the 2nd line of the 2nd hexagram changes it shifts Hexgram 2 into Hexagram 24, called “Return.” This hexagram depicts a turning back or returning to where we came from. It is both a sign of prohibition, “Sorry the flight has been cancelled, return again tomorrow,” as well as the liminal space we find ourselves in for the 24 hours before we return to the airport. Returning was depicted by the Taoist sages of the I Ching as the natural part of the year where we are forced home and into a reflective or passive position prior to moving out again. Although Return is often associated with circumstances that deny (for example, the hexagram talks about gates being closed at the winter solstice), the hexagram was also auspicious because it was believed that these times provide us with good luck in new endeavors. The only thing necessary is that when times of negation and return occur that we accept them gladly and with detachment.

Mars/Saturn…a time of restraint and constraint, a time of prohibition but also the solidification of wisdom. We’ll come back to this dynamic again in the coming days!
​
Prayer: Teach us to find the secret teacher and the lucky beginning glimmering brightly within the word “no.”