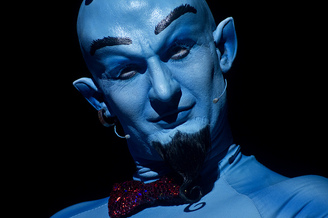 The New Moon is in Aquarius today, just as the Sun has entered Aquarius and we now move into the fixed sign of winter. Meanwhile, Mercury is stationing and will turn retrograde by Thursday (also in the sign of Aquarius). Today we’ll look at Aquarius a bit more in depth, then tomorrow Mercury retrograde.

For me it’s always best to start with the constellation image. For Aquarius the constellation image is the “water bearer.” This along with its “aqua” root makes most people think Aquarius is a water sign, but in fact Aquarius is an air sign. If we take this little piece of misdirection alone, we can learn a lot about Aquarius very quickly. Aquarius is sometimes like air disguised as water. Intellect disguised as emotion. Idealism disguised as compassion. Mind disguised as heart. There is a spacey coldness within the sign of Aquarius, a distanced eye from the heavens, a homesick alien longing to be human, expressing itself most humanly…”If only the human race could evolve or improve or ascend just a little higher, I would have more friends, I would have a real tribe, I would have some actual commonality. If only the human race could be more like the gods I so love.”

It’s often said of Aquarians that they love humanity but they can’t stand people. I always laugh at this joke, but I would modify it to read, “Aquarians love humanity, but they love the gods a little more.” The image of the water bearer in old times symbolized a young man who served the gods their divine nectar. In this simple image we see both the human love of all that is higher, more rational, more evolved, and more enlightened…the love of the gods that only the servant of the gods can truly understand, but at the same time within this love for all that is “higher,” we also see the consequential distancing or alienation from all that is truly human, complete with all our contradictions, inconsistencies, and instinctual qualities.

Aquarius plays the role of the inspiring messenger of the gods, as well as being their servant. Carl Jung once said that the price we pay for trying to harness the powers of the unconscious (the depth of space where the constellations live, lets say) is loneliness and isolation. This is the gods revenge upon us for trying to take their knowledge and use it to improve ourselves or “evolve humanity” or whatever else. The inflation of consciousness created by stealing something of the gods’ knowledge (from the unconscious) leaves us looking like egoists or weirdos to others. And yet, the voice of the gods, the messages and gifts they often send us, are unavoidable, as is the alienation we suffer when we grow in our understanding of the geography of the unconscious.

What a conundrum! For these reasons Aquarius is a sign often given to the Jungian concept of individuation. Aquarius, according to many Jungian astrologers, is the sign of the daemon or the genie, whose guiding influence comes into our lives in order to evolve or grow our consciousness out of the familiar and into a broader or deeper understanding of the unconscious. This “daemon” is often compared to Lucifer…a kind of light bringing but also rebellious spirit; neither human nor god, but somewhere in between. James Hillman has compared the daemon to Eros, or Cupid, a trickster, an intoxication, a lover, the backward lightning flash of beauty in the mind’s eye. The daemon’s lust for “man to become god” can enrage both the gods and people alike. “Let us just be who we are,” both the gods and the people might say to the daemon…longing for and admiring each other in our strange ways but also with appropriate distance and distinctions.

Sometimes the daemonic Aquarius can’t fathom why the gods and the people would want to remain separate. His refusal to allow for the separation, his insistence and rebellion, is what creates the image of devilish power, the daemon turned to “demon,” Lucifer to the devil, and the power of progress into the mangled results of a cloning experiment gone terribly wrong. The vegan with her machete of progressive intolerance. The friend who can’t shut up about how fucked up everything is and whose ego is building a tower called, “the ideal world.”

To my mind, astrology itself is highly Aquarian. That’s why it’s my firm belief that we astrologers have to constantly use our craft to shave the hubris off the faces of some of our most seemingly “divine” ideas, revealing the animal skin below or behind them. James Hillman once said that it was most important that we start doing therapy on our ideas, not just our historical or private sense of self. “Ideas that we don’t know we have, have us,” he said. The daemon is an ambiguous figure. Essential for the guiding fictions of our lives to play out and for the soul to develop along the lines of its most precious fantasies, but also a kind of thief and deceiver, a trickster rebel whose lofty causes should sometimes be questioned with the simplest language of human scrutiny, “Hey who do you think you are? Don’t be an a-hole. This is a dialogue not a dictation. I’m just fine with the way things are.”

The Saturn/Uranus double rulership of Aquarius also aptly represents all of these themes, but we’ll leave that for another post. All of these subjects should be especially in play over the next three weeks as Mercury retrogrades in Aquarius!

Prayer: Help us to learn how to dialogue with our daemons.


Image by courtesy of