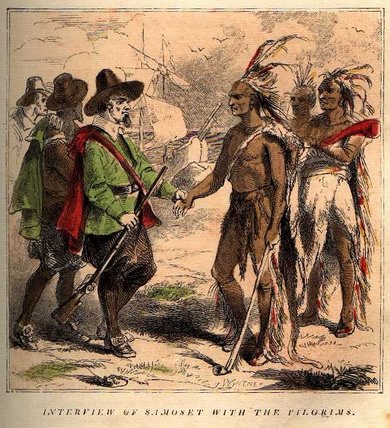 The Moon is still in Gemini today, and meanwhile the Sun/Mercury and Saturn are in square to Neptune.

Let’s talk about another Saturn/Neptune theme today, one that actually goes back to some of the early American themes that surround thanksgiving, and that’s the “fear of evil or bad spirits.”

It’s not a coincidence that the last time the Saturn/Neptune square was in Sagittarius and Pisces the Salem Witch Trials were taking place. With this combination in particular the religious, moral, and philosophical are in direct dialogue with the non-philosophical or mental reality of the spiritual realm. For some of us this is no big deal, we live with the reality of spirits or non physical reality every day, but for others the idea of “spiritual warfare” of any kind generates paranoia, excessive denial or control, or reactionary judgments or suspicion (that’s evil!).

Going back to the original Thanksgiving themes, the image of borders, boundaries, walls, and the fear of our neighbors all come to mind. The early American settlers were often terrified of the Native American people and essentially projected their fear through words like “pagan” and “devilry.” At the same time it’s probably safe to say that the Native American people had intense suspicions about the “white man,” and to some extent those fears or premonitions were essentially correct.

This brings to mind a deeper issue at the heart of Saturn/Neptune, and that’s the theme of compassion, or peace offerings meant to dissolve the fear or boundaries we draw between ourselves and others. Saturn/Neptune is very much about reaching over or through various boundaries in order to dissolve misunderstandings and prejudice. It’s about welcoming aliens, foreigners, refugees, or anyone sick, suffering, or afraid. It’s about putting aside our fears and saying, “I trust in the goodness of love.”

At the same time, Saturn/Neptune reflects the naivete of such wholesome intentions…a snake is a snake is a snake, as the parable teaches us. Understandably…some walls need to stay in place and some extensions of peace only lead to more suffering. A demon needs the word “no” more than a warm blanket.

The past week I’ve been encountering a strong degree of the paranormal, supernatural, and other worldly, especially at night and in dreams. With a baby on the way the desire to protect or raise the walls higher have been strong, and yet when I look at the media and see the fear mongering surrounding the Syrian refugees and the desire to “build the walls higher” I’ve been alerted to the potential for fear mongering and over conservatism or defensiveness.
I recall working with Schizophrenics in New York City during my Saturn return. Every day was about the relationship between the spirit and the body..how to help the residents establish good boundaries while also not trying to lock out the spiritual realms either (which only seemed to make the paranoia greater).

I’m also reminded of the scene from the Empire Strikes Back where Luke Skywalker is instructed to leave his weapons behind when he enters the cave of the dark side of the force. He doesn’t leave his weapons and hence his encounter is tremendously more confrontational. The metaphorical question right now might be how to arm or defend ourselves without the use of any literal weapons (whatever the ‘weapon’ might be). This also calls to mind the words of Obi Wan, “If you strike me down I will only grow stronger.”

These Saturn/Neptune dynamics might be taking place in any area of your life right now, so my advice would be to simply recognize the dynamic if it’s playing out. Sometimes recognizing the dynamic is the simplest way to not get spun out by it. On the other hand, the best practical advice might also have something to do with setting firm boundaries without fearing what’s on the other side, or learning to hold an inner boundary without the need of a demonstrative or theatrical “outer” boundary. Peace treaties are advisable, but so are honest and instinctual defenses.

Prayer: Help us to know the difference between the guardian presence of sacred awareness and the corrosive effects of fear..help us to remain open and faithful…remove paranoia from our hearts, and teach us how to hold boundaries while remaining compassionate