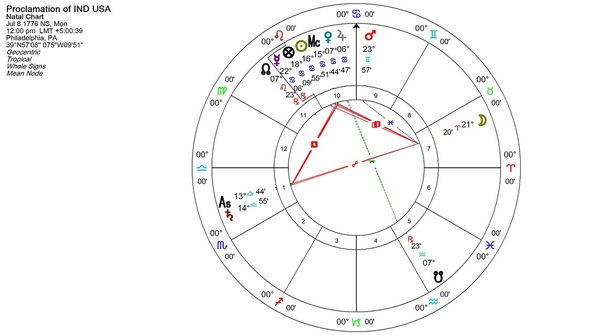 For today’s horoscope, a few interesting thoughts regarding the USA’s birth chart.

After doing some research this past week, I discovered a lesser known version of the USA’s chart called the “Proclamation of Independence” chart, a chart that marks the birth of the USA for the moment that the Declaration of Independence was first proclaimed to the public on July 8th, 1776 at noon in State House Square of Philadelphia. The argument for the superiority of this chart is fairly simple (outside of astrological comparisons of course): the declaration of Independence’s signing simply signaled the agreement of the document and the clarification of its wording and intention. The proclamation would more publicly signify the national “crying out” of that document (proclaim means to cry out!).

Here are some interesting things to note if we look at the proclamation of Independence chart in terms of what’s happening right now:

* The USA’s Sun is receiving an exact opposition from Pluto in this chart, who is also sitting exactly on the IC. This would appropriately signify the unique challenges we’re facing in our country right now…a national identity crisis that has deeply rooted divisions based on ethnicity, race, gender, religion, etc.

* The USA’s Moon in Aries in the 7th house is simultaneously receiving a conjunction from Uranus in Aries. Here we see the revolutionary spirit of the people (the Moon represents the people), the complications surrounding Hillary Clinton as potentially the first female president. It also signifies the populist movements happening on both sides of the political spectrum right now.

* The USA’s Mars in Gemini in the 9th house of religion is also receiving an opposition from Saturn, which will intensify in the next year or two. This opposition is reflected in the rise of the religious right against the LGBT community in North Carolina, the anti-Muslim sentiments of the Trump campaign and political right wing, as well as the religiously fueled warfare between the US and ISIS (including all of the various hypocrisies involved in the regime changes that we’ve created that have contributed to the rise of terrorism). And last but not least, the Saturn/Mars opposition speaks to the rising issue of gun violence, police brutality, demonstrations and protest against these injustices, as well as extremist ideological responses to injustices in general.

I’m not ready to “proclaim” that this version of the USA’s birth chart is superior to the Sibley chart, or any other version, but I find this chart to be more clearly linked to the current transits, which seems like a good place to start a more serious investigation of this version!
​
Prayer: Teach us to proclaim light, life, compassion, and peace in the world, one small moment by one small interaction at a time.