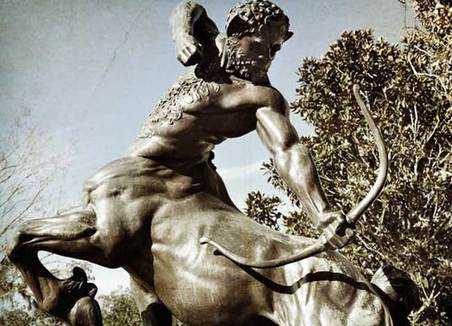 The Sun has entered Sagittarius today.

* One fascinating way of understanding the popular mythology of any zodiac sign is to examine the Sun’s position relative to the equinoxes and solstices.

* During Sagittarius season we are in a double-bodied sign, which means the sign is of two natures. It participates in the fixed/solid nature of the previous sign of Scorpio, as well as the tropical/cardinal nature of the next sign, Capricorn. Every double-bodied sign is part of swiveling us around an equinox or solstice point from a fixed or solid part of the zodiac.

* Pause. Philosophical diversion. Skip ahead to the next point if you’re not interested!

Before I go any further, someone is always bound to ask how the seasonal symbolism could possibly apply to people in the southern hemisphere, who are essentially experiencing the opposite seasonal qualities right now. The simple answer is that astrology is a symbolic/divinatory language whose orientation comes from a specific place on earth. So “zodiacal winter” or “zodiacal fall,” are archetypal. If you were born in Sagittarius season in the southern hemisphere it might have been the literal end of Spring and beginning of Summer, but you were born, within the symbolic language of tropical/western astrology, at the zodiacal cusp between archetypal Fall and archetypal Winter. This is the same basic reasoning we use to explain why numerous zodiacs (Chinese, sidereal, etc.) and numerous languages of divination from all over the world (I Ching with its own seasonal symbolism that is unique to China, or the Tarot) works. The cards you pull from a Tarot deck are not causing anything to happen. They are signifying something. Similarly, the seasonal symbolism utilized in the zodiac doesn’t have to be thought of as literal and causal but rather symbolic, at which point the orientation of the zodiac with regard to the seasons is, indeed, arbitrary. However, a system of divination needs an orientation, so we also can’t do without a consistent frame of reference. Some of my students have asked, for example, if a person in the southern hemisphere could reverse the zodiac and use it consistently with good results. I think the answer has to be yes. I don’t think it would work overnight because I think you would have to establish the orientation of the framework in practice, entraining it to your body, and probably others would have to utilize it for it to develop greater divinatory “gravity,” but I do think it’s possible…how else can we explain the subjective orientation of so many different and totally effective zodiacs and other divinatory languages throughout time? The language isn’t literal and it’s not causal…no more than drawing the Sun card causes the Sun to come into the sky each day!

* Back to Sagittarius. Sagittarius comes at the time of year when the Sun is descending into the darkest time of year, a time when the Sun has descended farthest south in the sky and hence farthest away from the unchanging pole star in the north (which it is closest to at the brightest/longest day of the year, on the Summer solstice).

* At the very end of Sagittarius, the Sun pivots and begins to ascend again.

* The descent into darkness and the initiation of the return of the light are both archetypally reflected in Sagittarius.

* The descent into greatest darkness can be explained in a variety of ways. Darkness is a classical symbol of materiality, ignorance, matter, desire, the body, and the imprisonment or descent of the spirit within the body.

* The descent into greatest darkness can also be explained in terms of the recognition of what lies beyond superficial appearances. The darkness can also be understood as what is subtle, what is unconscious, or what sagely wisdom lies beyond what the eyes can see. The darkness is also the place of the soul, of mystery, and of the inner/invisible forces of nature that we are often driven by without any real understanding.

* The return of the light can also be viewed in terms of the goal, the ambition, the ideal, the wish, the desire that drives action toward a consciously fixated image, etc.

* Put together we have within Sagittarius the drive toward the darkest dark and the return of the light. Think of this classic character. A cocksure lawyer, torn apart by vanity, ignorance, drug abuse, and sexual appetite. The lawyer is competitive and incredibly smart, but also self-destructive and vain. Then, by chance, the lawyer happens upon a client with a real life cause, a real human injustice has been done. Somehow the cause strikes a chord or hits close to home. This same lawyer redeems his/herself through championing their client’s cause. The case inspires them to be the full picture of strength, wisdom, competition, and bravery. Rather than being torn between darkness and light, they are a living sage and a living warrior in one. Champions of the light, familiar with darkness.

* That’s just a story. But it’s a good one for Sagittarius. Think for example of Woody Allen. Allen was born with a Sagittarius Sun. His films epitomize the journey of the hero who is consumed by darkness, doubt, and narcissism, only to be redeemed, often through a misadventure, into a kind of lightheartedness.

* Or think of Katie Holmes and her descent into Scientology, or Tina Turner and the personal darkness she experienced.

* But on the other hand, think of Pope Francis, Jon Stewart, or Emily Dickinson…complex characters familiar with darkness but carrying the message of light.

* The combination of ego and ideal, of darkness, maddness, stomping, romping, loud, bold, wild-animal and competitive with redemptive, hopeful, jovial, wise, humane and “real.” These are the double-bodied qualities of the centaur, the abode the Sun passes through as it reaches the greatest darkness and also looks back up toward the light.

* Each year during Sagittarius season I pray, do some fasting, and daily meditation and ask my readers for support in the year ahead. If you enjoy reading my daily horoscopes, if they offer you some light in the darkness, some starry realness in the midst of the mundane, then I ask you to pitch in and support my annual kickstarter, some of which goes toward supporting these columns in the year ahead, and some of which goes to a variety of projects we are building through our yoga studio community! Find the link to donate in the comments section below!
​
Prayer: Within the greatest darkness, a seed of light. Cause of all causes, end of all ends. Thank you.